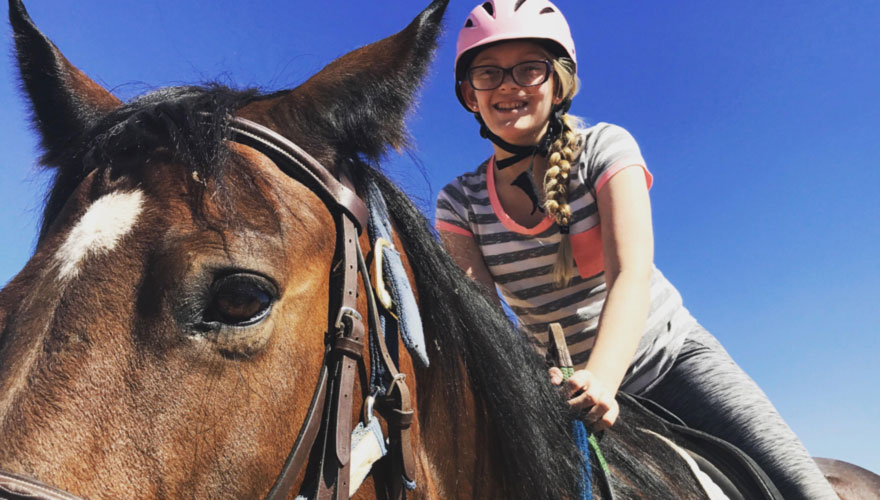 Emma Crozier was just 2 when she first started having seizures. Now she’s 13 and can describe what they feel like.

The skinny girl with glasses and one long, blond braid of hair fidgets and bends her legs up to her chin as she talks. Her mom, Jessica Crozier, chides her gently for putting her shoes up on a plush living-room chair. In the background is a baby grand piano with sheet music open on a stand, next to it a guitar. The piano is Jessica’s and the guitar Emma’s, but Emma gave up the instrument not long after her parents bought it for her.

“It’s scary, but kind of empowering to take our kid’s health into our hands." — Jessica Crozier

“I can feel them,” she said of her seizures, “when these two hands are shaking a little bit and my head senses it.”

Emma has been diagnosed over the years with epilepsy, optic nerve hypoplasia, a pituitary-gland disorder, and hip dysplasia.

The seizures can be bad. Emma blacks out — she has no memory of them, though they last for only a minute or two. Sometimes she falls and hits her head. She used to have several seizures a day, but then Crozier began giving Emma medical-grade cannabis that contains high levels of cannabidiol.

Also known as CBD, the cannabis molecule reputedly has benefits for all sorts of health problems, and the increasing number of products that contain it have experienced a recent and remarkable growth in sales. Scientists and cannabis experts have known about CBD for decades, but interest in the substance — especially its use in treating seizures — really took off when it was featured in a 2013 CNN series on medical cannabis hosted by Dr. Sanjay Gupta.

Crozier works for a local dispensary, but said she wasn’t authorized to speak on its behalf for this article. She said she’s personally convinced that CBD has worked as intended.

“We noticed a positive change in behavior — an improvement in cognitive behavior,” Crozier said, adding that Emma never appears to be stoned or impaired by the drug.

Emma ingests dried, crushed-up cannabis flowers in capsules that her mother prepares. Crozier makes the process look easy. She has two strains in labeled jars on her kitchen counter. One was Cannatonic, which she said contained 14 percent CBD and only 0.6 percent THC. She puts that one in a toaster oven for a few minutes to help activate the THC. The other strain, Harlox, has 9 percent CBD and 6 percent THC, but Crozier doesn’t activate that one.

Crozier has an Arizona medical marijuana caregiver card, which protects her from prosecution under state laws, and has some federal protection while the Rohrabacher-Blumenauer Amendment still exists. The Congressional amendment prohibits federal funds from being spent to disrupt state medical-marijuana programs like Arizona’s. It’ll expire on December 8 unless Congress renews it.

Like a skilled apothecary, Crozier carefully weighs out the crushed bud on a small scale before stuffing it through a tiny funnel, letting it fall into an array of open capsules in a tray. Crozier has bumped up Emma’s dosage over the years — now she gets 125 milligrams of cannabis in the morning, 50 milligrams at lunch, and 125 at night.

CBD treatments have reportedly helped Emma in other ways, including better cognitive function and less-shy behavior. Jessica Crozier “I know what plant works best for her,” she said. “And a little active THC works well for her.” Emma downs her afternoon capsules in seconds with a glass of water.

“What about your medical marijuana — how do you feel when you take it?” her mom asked.

Emma and her family are preparing for a trip to Disneyland later in the month and they hope she’ll be free of any seizures. She hasn’t had one in three weeks, but Crozier said she thinks part of the reason is a new protein diet they’re trying.

Crozier’s tried a variety of cannabis strains and dosages over the years for the girl.

“We don’t have a specialist saying exactly what to do — you have other parents,” she said. “It’s scary, but kind of empowering to take our kid’s health into our hands.”

If the same trends continue, more people than ever will be similarly empowered to choose cannabis extract as a remedy, whether from a dispensary, CBD store, or pharmaceutical company.

Science will sort out later if cannabis really provides for better health care.